The roots of Fushiogami Oji are not well known. It is said that pilgrims bowed down in awe after reaching the oji and seeing their destination of Kumano Hongu Grand Shrine in the distance. Fushi means to "kneel down,"and ogami means "to pray." One of the monuments at Fushiogami Oji is a gift from the Kumano Jishu Buddhist sect.

There are several references to a lady called Isumi Shikibu who lived in the Heian era (794-1192). She was a poet, and she weote a novel about court life of the times. A prolific writer,she has 240 poems included in court anthologies. When she traveled to Kumano to Fushiogami Oji, it was the time of her menses. In despair, she wrote a poem expressing her feelings.

The drifting clouds of my body gather and will not clear

Worldly troubles brought by the touch of the moon

The gods came to her in a dream and answered with this poem:

Even the gods were once covered in dust

So what troubles can the touch of the moon bring

The gods in Kumano accept all people:All can find salvation including men, women, children, the young and old, the sick and the healthy. The nearby rest area is staffed by volunteers. The hillside opposite this oji is planted with tea plants. There is a beautiful view from the top to all the points on the compass. 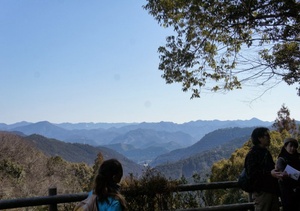