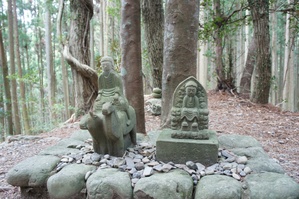 Although the name sounds as if there is an  oji  included in it, this is not actually an oji shrine. This stone statue is thought to be the figure of Kazan,a young emperor who was tricked into retirement by political maneuvering of powerful nobles at court.He rides on the backs of a horse and a cow.Kazan was at the age of 19 when he made his first pilgrimage to Kumano.He rides straddled on the backs of a horse and cow.

Kazzan was at the age of 19 when he made his first pilgrimage to Kumano.He rides straddled on the backs of a horse and cow.The word Gyuba-doji is made of three parts. One is gyu,which means "cow",and the second is ba,which means"horse." The third is doji, which means "child." These three words aree joined together to make one word meaning,a "child riding a horse and a cow. "There is a Hokyo-in-to tower which is said to date from the Kamamuraa(1192-1333) era.

In 2008, a vandal lopped the head off of the statue of Kazzan. Many people searched for the vandalized head to no avail. Areplica of the head was replaced at great expense,and the stone made great efforts to blend the new head with the old body of the statue.

Two yearspassed. One day,the original severed head was found laid on a bench in town st a bus stop.