Midway along the path between Yunomise Hot Spring and Oyunohara, there is a jizo carved into the side of a hill. In the early Edo period, there was a sculptor, Jingoro Hidari, famous for his carvings at Toshogu Temple in Nikko. He carved three monkeys to show the lesson of "see no evil, speak no evil, and hear no evil." Jingoro was asked to carve a sculpture for Toko-ji Temple in Yunomine. Jingoro started carving, and his apprentice brought him a box lunch daily from Hongu by carrying it over Dainichi-goe Pass. His apprentice was quite pious, and he always stopped to give a few grains of rice to a jizo carved into the rocks along the way. One day, Jingoro noticed that part of his lunch was missing. Jingoro thought his apprentice had eaten it, and he got so angry at the young man that he struck him on the nose with his wood planer and shaved part of it off. However, the apprentice's nose healed quickly. The next time the apprentice went by the jizo on the mountain, he noticed that the jizo's nose was missing. The apprentice thought the jizo sacrificed itself in return for the apprentice's devotion to the jizo. Since that time, the jizo with the missing nose has been standing along the trail protecting travelers. 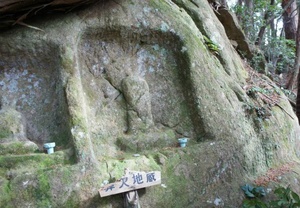