Koban Jizo is dedicated to a traveler who died on pilgrimage. The traveler was found dead with a koban, an oval shaped coin, in his mouth.

There is a small statue on the left of the path 400 meters up the path from Jujo Oji. It dates from 1854. Many travelers who were ill, suffered from infirmities or hunger collapsed and died on the Kumano pilgrimages. Some of them carried travel expense money in the folds of their clothing to be used for condolences or burial if the occasion occurred. The koban found in the dead man's mouth was used to pay for his burial and to erect a small statue in memory of him. The path is narrow and climbs uphill for some time.

Pilgrimages to Kumano Sanzan experienced ups and downs because of the decline of the Kumano faith, however, ordinary people's dream was to make a pilgrimage to Kumano Sanzan at least once in their lifetime as well as to Ise Grand Shrine in the Edo era. In the Heian era, nobles sought salvation from the Kumano gods, but in the Edo era, many people enjoyed traveling as sightseers even though they knew the song as follows:

When you travel to Kumano, it's very far on foot and very steep along the routes, but going on

horseback is not worth salvation. 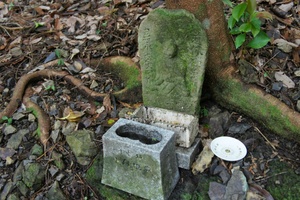