It is said that three crescent moons will appear suspended in the night sky on the evening of November 23. This legend comes from the time when Kumano Hongu Grand Shrine was established at Oyunohana (BC68).

Over the centuries, it seems that the three-fold moon has been sighted from time to time.

In ancient times, it was thought that the appearance of the three moons were appearances of the gods of Kumano.

There are several places in Kumano in the Nakahechi region where festivals are held in hopes of seeing the three-fold moon. The night skies are clear, and the stars seem close to earth at that time of year. It is thought that the multiple moons appearing are due to the refraction of water particles suspended in the atmosphere.

No one seems to have seen the three-fold moon in recent times. 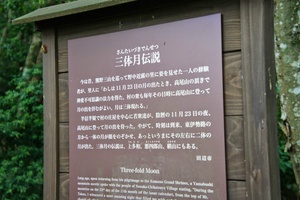 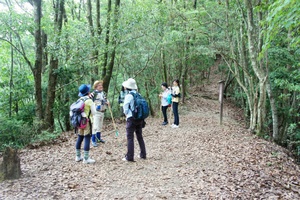