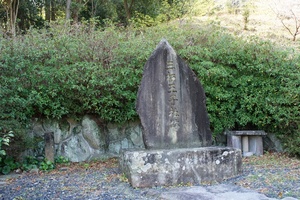 The remains of Misu Oji are located on a gradual slope overlooking the ume plum orchards of Misu near Zenko-ji Temple. There is a stone monument to mark the site. This oji was referred to as "Misu Oji" in Teika's  journal. This site is designated as an historical asset of Tanabe City.In recent years, the ancient route from Misu Oji to Yagami Oji has been restored, so it is now possible to walk the paths of the old routes of the Heian era once again.