The Nonagase Clan's cemetery is located just off the old route of the Kumano Kodo. The Nonagase clan was prosperous in the era of Muromachi (1392-1493). Several daughters of the Nonagase clan married into the imperial family. In 1229, Nonagase Rokuro Yoritada arrived for government service at Chikatsuyu from Yoshino, Nara the site of the southern court. In 1331 the strife between the southern and northern imperial courts called the Nanbokucho War escalated. The imperial court of Japan was divided over which court, southern (nan)or northern(boku) was legitimate. The northern court in Kyoto won out. These events had a strong influence on Japanese history in regards to the modern emperor system.

A son of the emperor, Otonomiya Moriyoshi, escaped from Kasagi Castle and moved to the house of Hyoe in Nara in order to raise an army. In September 1332, when Otonomiya suffered an attack from the Tamaki clan, the Nonagase clan warriors at Totsukawa River went to support Otonomiya. They received the family name "Yokoya" for their support. Yoko means "to the side," and ya means "arrow," so the name comes from the clan's "support on the side with arrows." In another incident, Kusunoki's army was confined to Chihaya Castle. Nonagase Moritada delivered rice to Chihaya Castle from Chikatsuyu. Thus, the Nonagase clan made many contributions to history.

This cemetery has been designated as an historic site as an important cultural asset in Wakayama Prefecture. The stone stupa such as gorin-no-to and Hokyo-in-to are said to be from around the end of Sengoku(Warring) era (1493-1573). 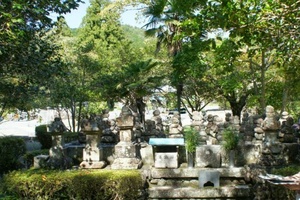