The path from Takijiri to Takahara is a steep ascent up Tsurugi-yama. About fifteen minutes from leaving Takijiri Oji Shrine a big jumble of house-sized boulders is to the left along the path. Some of these massive stones form a narrow cave called Tainai-kuguri. Tainai means "birth canal" in Japanese, and kuguri means "to pass through." The opening at the foot of the cave is fairly wide, but the exit is very narrow and doesn't appear large enough for a person to pass through. In order to pass through the cave, you need to twist your body half way through your passage, much as a newborn baby passes through the birth canal. 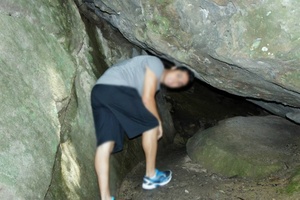