This shrine is the oldest existing shrine along the Kumano Kodo in the Nakahechi area. The deity of this shrine is said to have been transferred from Kumano Hongu Grand Shrine. The first recorded reference to this shrine occurred in 1109. The name of this shrine is seen in Kumano Gokoki, a travel journal written by Fujiwara Teika. According to his journal, he visited this shrine. The shrine is sometimes referred to as Takahara Oji although it is not an oji. The main building was built in the Kasuga Taisha shrine style in 1544. It is a beautiful vermilion color building with a cypress bark roof.

There are several giant, old camphor trees on the shrine grounds.

Takahara has been written about by poets through the ages. The area around Takahara holds beautiful views in all seasons. A local pageantry with people dressed in period costumes of a thousand years ago is held every year on November 3. 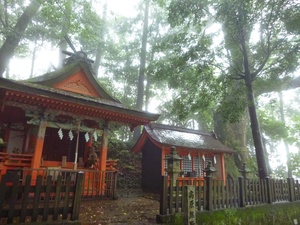