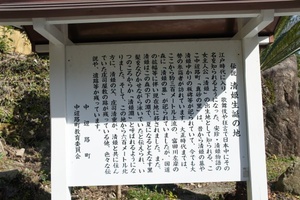 In the year 908, Princess Kiyohime was born into a family Living at Manago in Nakahechi. She grew up to be a beautiful princess.

One day, a monk  traveling from the north of Japan passed by her home on pilgrimage to the Kumano Sanzan. The monk, Anchin, stayed the night at Kiyohime's house. They fell in love, and Anchin promised Kiyohime to marry her when he came back that way after finishing his pilgrimage.

Time went by,and Anchin did not come back. Kiyohime waited and waited.

Kiyohime felt betrayed by Anchin and chased after him when she learned he had snaked past her house, and did not intend to marry him.

She chased him all the way to Dojoji Temple in Gobo. As she chased after Anchin, her grief over her lost love turned into a deep burning rage, and she turned into a snake. Anchin ran into the temple and begged the priests to hide him. There was no place to hide, so he hid himself inside a huge temple bell.

Kiyohime came to the temple and discovered Anchin was hiding in the big bell. She wrapped her serpentine body around the bell and incinerated Anchin in her fury. Then, she was overcome with grief and went to the Hidakagawa River to commit suicide. She asked to be reunited in heaven with Anchin.

It is said they lived happily in heaven from that time.