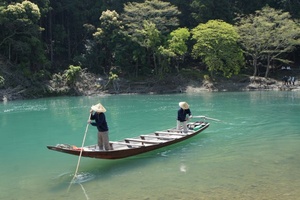 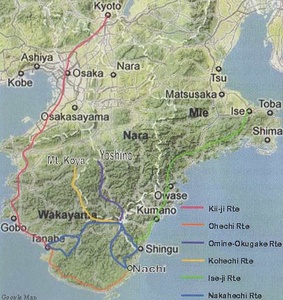 It runs south along the western coastal line of the Kii Peninsula from Tanabe to Hananomiya-oji in Nachi Katsu-ura-cho.  During the Edo era (1603 - 1868), this route was used mainly by writers and artists.  They took this route after they visited the Kumano Sanzan (which consists of Kumano Hongu Taisha, Hayatama Taisha and Nachi Taisha).

The views from the trails give beautiful scenic vistas over the Kii Channel leading to the open Pacific Ocean.  The distance between Tanabe and Hananomiya-oji is about 92 kilometers.  Inland along the coastal line, there are three famous slopes.  They are Tonda-zaka, Hotoke-zaka, and Nagai-zaka.  The slopes are midway between Tanabe to the west and Fudarakusan-ji Temple near Nachi Falls the farthest southward  on the peninsula.

At Kushimoto-cho, you can see a unique rock formation called Hashikui-iwa.  The jagged rock formations look like piers of a long bridge extending out into the ocean..

This route was not so well maintained compared to the Nakahechi route.  Even today, only a few mountain passes are well preserved.  This is also one of the routes for pilgrims who travel around to the thirty-three Kannon pilgrimage temples in the western part of Japan called Saigoku Kannon Pilgrimage.  The route is said to be long and have forty-eight slopes.  In the past, there were no oji shrines and very few accommodations along the way.

There are no written records showing that retired emperors and their retainers went on pilgrimage along the Ohechi route such as the pilgrimages did on the Nakahechi route.    It was not until the time when the feudal lords and high ranking temple priests in the Kishu domain  started walking in the Edo era that this route came to be well maintained.

Some pony express stations, demasho, and road markers, ichiri-zuka, were built with the increasing number or travelers.  Travelers walked this route on the way back from Kumano Hongu Taisha or Hayatama Taisha as a detour instead of walking over the two passes of Kogumotori Pass and Ogumotori Pass because those two mountain passes were surprisingly difficult to traverse.