The faith of Kumano is based on harmonization between Shinto and Buddhism called Shinbutsu-shugo. At each of the shrines,there are both Japanese native gods and Buddhist entities enshrined. This is Gongen,which simply means"to appear." It appears that there are three big shrines at Kumano Hongu Grand Shirine,but there are actually four and a smaller new shrine to the far right. The shrine in the middle is the main shrine. The building on the far left is actually two shrines in one building.

Shinbutsu-shugo is the mixing and accepting of various religious faiths in Kumano. This is the only place in the world where a pilgrimage route welcomes all faiths. When you walk the Kumano Kodo,it is believed that you can have rebirth in this lifetime,yomi-gaeri. That means that your spirit and body will be renewed in some way by coming here. 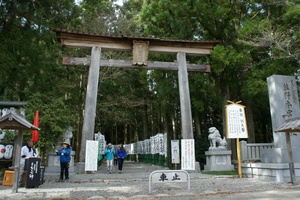 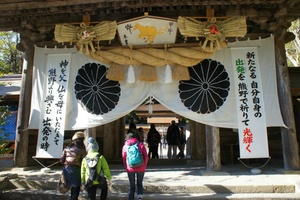