A disciple of Saint Ippen,Joukai,arrived here earlier than his master. He cooked rice while waiting for Saint Ippen to arrive,and he noticed water in the cooking kettle disappeared before the rice was cooked. He went to get water in a hurry,returned,and saw acrack in the kettle. The rice was burned black. Later Saint Ippen caught up with him,and Joukai began to walk again without eating or drinking as a religious test. He thought he had been given the ordeal to test his faith. The area around here is called Nabewari. 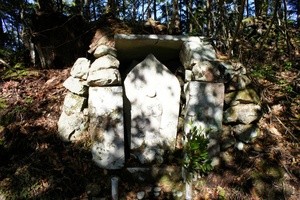